The Sketching in Hardware 2 conference was a blast. So many interesting people and ideas. I wish we could have it every few months. Mike has his notes and a good summary of this year’s Sketching.

My talk was on “Smart Interface Components”. It was a generalization of the things I’ve been thinking about with the Smart LED prototypes.

Slides from the talk: sketching07-tod-smartcomponents.pdf

What are Smart Interface Components? Current interface components, the sensors and actuators that comprise the user interface of the gadgets we use, are dumb. They require specialized domain-specific knowledge to make work correctly, non-trivial processing to use, and in general are a pain. Tiny microcontrollers are becoming cheap enough to embed even at the edges of our hardware designs. A component with local brain can embed some of the domain knowledge and enable a higher level of communication between it and the application processor.

An example presented is a Smart LED. LEDs are dumb. Multi-color LEDs are hard to control. Can we make it better?

Imagine an LED that instead of worrying about PWM and current-limiting resistors, you just give it the HSV or RGB color values via a serial line? “#FFCC22 @ 20% brightness”, you say. 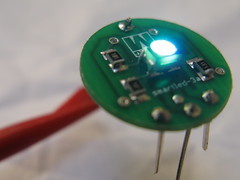 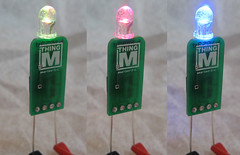 Work is continuing in making production versions of these smart LEDs.