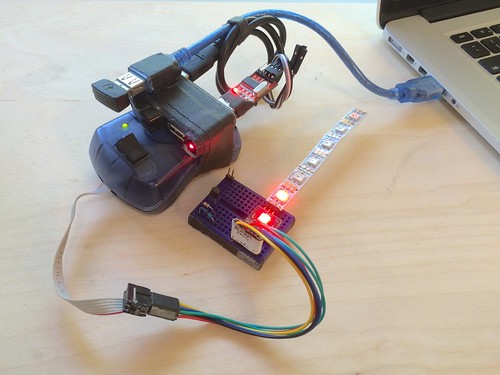 Recently a CrashSpace member asked about my little portable AVR dev platform. It’s small, compatible without avrdude hacks, and cheap enough to not worry about. Though it’s a gaffer-taped together setup, it’s served me well for about 10 years.  It’s in a go-bag about the size of my laptop’s power supply, so it’s often with me.  But people do sometimes look at me strangely when I whip this out at coffee shops. (but then I blink LEDs and all is forgiven)

The kit consists of:

Just plug it all together and go.  The AVR ISP mkII is an official one from Atmel and is about $30. It looks like it may not be made any more, but there are many clones out there. The nice thing about the official one is that it works at 5V & 3V and has short-circuit protection.  I do wish the ISP protocol was faster though.  Compared to bootloaders, it’s around 5x slower. That adds up.

The VTG +5V switch add-on is super useful.  Normally ISP programmers don’t supply power to the target. (and shouldn’t, you don’t have to have a power supply fight)  But when doing exploratory development, having the programmer providing the power is really handy.  if you don’t want to mod your programmer, you could take an old USB cable, cut it up and run the +5V to your board.  If I were to do it again, I’d add some sort of current-limiting for those just-in-case oopses.

You don’t always need a serial port but when you do, you really do.  I usually keep this plugged in just in case, sort of like how I always keep a few LEDs & 1k resistors on hand.  Both are great for on-the-go debugging.

For working with the strange, small boards I make, I have a collection adapters made from male-to-{male,female} jumpers that go from the AVRISP 6-pin connector to whatever I’m working on: 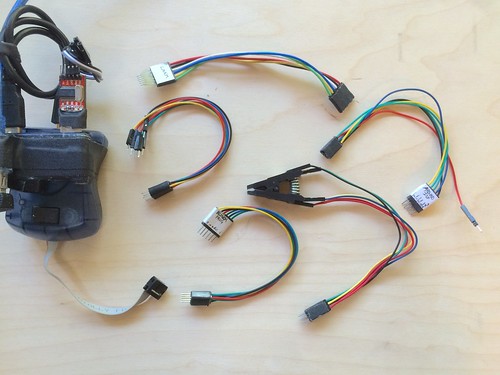 And when I work on PIC USB projects, I have a similar one for PIC.