The Boarduino is an Arduino work-alike kit from Adafruit.com that’s smaller, cheaper, and you can build it yourself.

The Boarduino’s small footprint made me want to see how small of a device I could whip up in an hour from some fairly complex components. So I decided to see how small the combination of a Boarduino, a Wii Nunchuck, and a hobby servo motor could be. Here’s a little video of the result.

The Wii Nunchuck is an amazing piece of technology. For $20 you get a 3-axis accelerometer, a 2-D analog joystick, two buttons, and it’s all accessed via the standard I2C protocol. A hobby servo is another piece great tech; only one wire is needed (besides power & ground) to specify the angle the motor should turn to. And both of these devices can plug straight into a Boarduino or Arduino board.

The schematic, such as it is, for the device in the video is:

The code that the {Bo}arduino is programmed with is:
– wii_nunchuck_servo.pde
It borrows heavily from the great work done by Chad Philips at Windmeadow Labs.

The Boarduino is small programmable microcontroller and is an Arduino work-alike. It uses the same programming software as Arduino and can substitute for an Arduino in any Arduino projects. 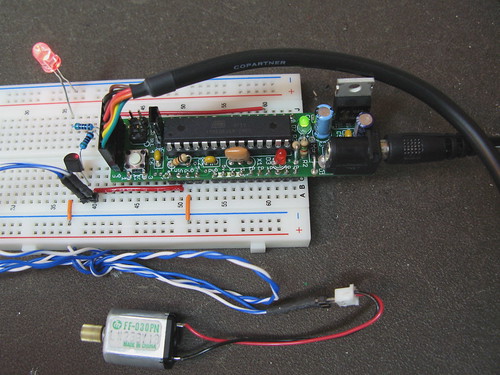 All its pins are at standard 0.1″ spacing.

This ends up being cheaper than the standard Arduino prototyping solution of a “shield” board that plugs onto the top of an Arduino board, especially if you do lots of projects. The Boarduino does cover up a substantial part of a breadboard. If this bothers you, there is the Bare Bones Arduino clone from Modern Device.

One of the ways Boarduino is so tiny is that it omits the USB-to-serial interface chip that is part of every Arduino board. Having that always present is really convenient, but it takes up space. The company that makes that chip, makes a cable that with the chip embedded into it. 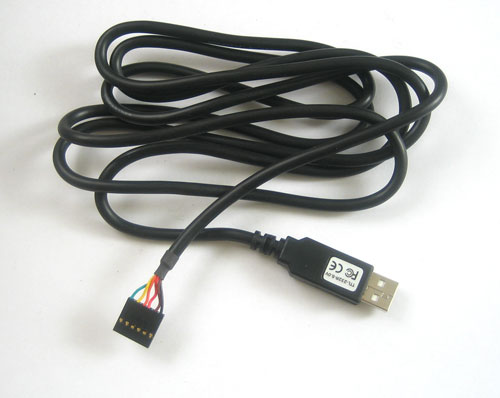 Adafruit sells this cable, cheaper than anywhere else if you buy it with a kit. If you have multiple Boarduinos, you only need one FTDI cable for them all. And the cables are useful for other little non-Arduino projects that require a USB-to-serial connection.

The Boarduino comes as an easy-to-solder kit, with excellent step-by-step instructions. In fact, the instructions are so good, with schematics and board layout files, you could build your own Boarduino without buying a kit from Adafruit, but they’ve done all the hard work so you just have to solder it together.

This is what the Boarduino kit looks like out of the bag: 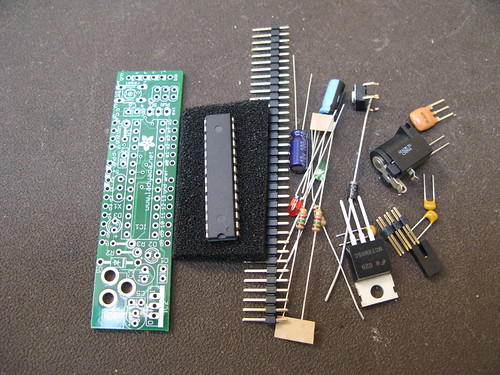 If this is off-putting to you, don’t worry. These are really standard parts that are hard to mess up. Adafruit’s documentation not only walks you through what the parts are and how to turn the kit into a working board, but also what tools you’ll need (with links) to get the job done. If you’ve soldered anything before, this will take you about an hour. If you’ve never soldered before, set aside a few hours. At the end you’ll have both an extra useful skill and a new working gizmo.

Finally, if you begin to grow out of the Arduino coding environment, the Boarduino is also a nice little inexpensive AVR ATmega{8,168) development platform. It contains the standard 6-pin ISP header that works with any AVR programmer.

If you like Arduino or AVR stuff, pick up a Boarduino and play with it. Then you too can make Frankensteinian devices like this: 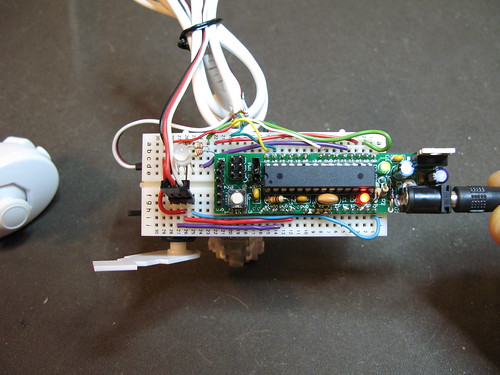