The RooStick by RoombaDevTools.com is pretty cool. It’s tiny and it’s USB, which is about all you need for me to bring you home.

But if you want to hack together something similar and you don’t want to build a huge honking Roomba serial tether, you could build the Roombongle!

The Roombongle is a USB adapter that allows you to control your Roomba from your computer, via the Roomba’s SCI protocol. Don’t have a Roomba? Get one! 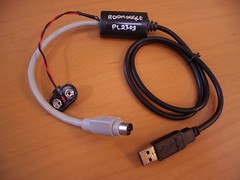 The Roombongle is made from a phone sync cable. Out of the box it’s pretty unassuming: 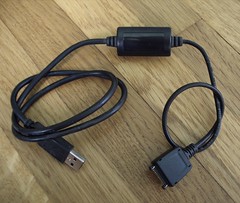 Make sure the cable you get has the little bulge in the middle. That’s where the magic happens.

It turns out that if you take the little bulge apart, there’s a friendly little PL2303 USB-to-serial adapter chip inside: 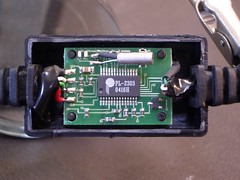 You can download the spec sheet for said chip and you’ll see that it normally works at 3.3V, but its inputs are 5V-tolerant and its 3.3V outputs are within the valid range for 5V logic. Thus, the Roomba should understand it, and it should understand the Roomba. Obviously the thing to do next is graft a Roomba-compatible Mini-DIN 8-pin cable to it: 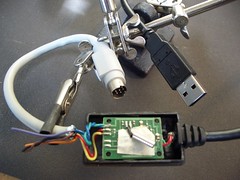 Just RX, TX, and GND are all that’s needed. You can route the +16V from the Roomba to an external connector if you want. That’s what the 9V connector-like thing is in the top photo. Once the wires are soldered down, just snap the case back together, use a little hot glue to seal in the Roomba cable and act as a strain relief, and you’re done.

Now with the Roombongle, your laptop is free to explore its surroundings, no longer reliant on you to carry it from place to place. 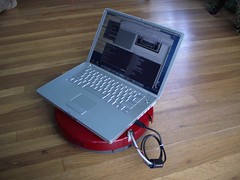 Thanks and Inspiration
The guys over at NSLU2-Linux did the hard work of figuring out these Radio Shack data cables. And not just the Nokia ones, but all the other sync cables RS sells.

The PL2303 chip is a pretty good one and supported on all the OSes. Linux has the driver built into the kernel so you can just plug it in and go if you’re running Ubuntu.