Currently I’m the main maintainer of node-hid, the Node.js package that lets you talk to USB HID devices like blink(1).  I recently cribbed automated build config from node-serialport so now node-hid is automatically built for Mac, Linux, & Windows and Node 4.x,6.x,7.x.   It’s pretty cool to have these robots doing my bidding.  But did you know you can do automated builds of Arduino sketches too?  I didn’t until last night and it’s AMAZING.

For instance, that CrashSpace BigButton Arduino sketch I mentioned previously, is now getting automatically recompiled for the Wemos D1 mini ESP8266 board every time I check in. See?

How is this magic done?

END_OF_DOCUMENT_TOKEN_TO_BE_REPLACED

[originally posted on the ThingM blog]

The theme for the Caltech Entrepreneurs Forum’s November event was “The Internet of Things, Arduinos and the ‘Maker Entrepreneur’“.

My talk “Intro to the Arduino Entrepreneurial System” touched on all these topics. The entire event was a blast, including a wonderful talk about commercial making with open source by Quinn of QtechKnow.

Slides with notes and MP3 audio of the entire event are below.

Intro to the Arduino Entrepreneurial System from todbotdotcom

Download MP3 of the entire Forum proceedings, including Tod’s talk.

I finally got around to updating the BlinkMuino guide for turning your BlinkM, BlinkM MinM, or BlinkM MaxM into a tiny ATtiny85 or ATtiny84 Arduino system. BlinkM boards make great tiny development boards, especially if you’re interested in driving LEDs. BlinkM MaxMs are particularly great because they have more inputs and those three beefy MOSFET power transistors. And MinMs are good because they’re super tiny, but still contain a fully-programmable computer.

Thankfully, the ArduinoISP sketch has also been updated for Arduino-1.0, meaning you can use your Arduino as an AVR-ISP programmer, like this:

Here’s the original video I made about BlinkMuino:

We’ll be showing off some examples of BlinkMs programmed with Arduino at Maker Faire, some say “hi”!

In late 2006 I wrote “arduino-serial“, mostly for myself, to help with stuff I was working on at the time. It was a very simple & small, cross-platform tool written in basic C for reading/writing serial ports.

Now nearly seven years later I still get regular questions and frustrations about it. Part of this is due to how Arduinos have changed over time. You used to have to hand-reset an Arduino board, now the act of opening the serial port resets it. This has its plusses and minuses, but it really made my original use-case of arduino-serial fail. Then there were just all the minor deficiencies of the program.

To address some of these issues, but still keep things small & light, I’ve done a bit of fix-up of arduino-serial. It’s now hosted on Github at:
https://github.com/todbot/arduino-serial/

Some changes that I recently made to arduino-serial:

Here’s what the new usage help screen looks like:

arduino-serial has always been designed so you can “pipeline” commands/options, but it wasn’t implemented very consistently. It’s a bit better now. You can do multiple send/read pairs, even use multiple serial ports, all from a single command-line invocation.

For example, if you have the “SerialCallResponseASCII” sketch from the Communications examples loaded onto your Arduino, you can run commands to take multiple data readings. In the example below, the order of operations are:

The flush was put in there to demonstrate that you could flush the receive buffer mid-command if you wanted. It’s not required, but might help some situations.

Did you know you can run Arduino programs on tiny BlinkM Smart LEDs? It might make BlinkM the smallest Arduino so far. To use a BlinkM as an Arduino, all you need is the free Arduino software, a low-cost AVR programmer, some wire, and a BlinkM.

Here’s a quick video showing how it all works.

END_OF_DOCUMENT_TOKEN_TO_BE_REPLACED

I love Arduino but its lack of wireless bugs me. And it sucks that WiFi Shields for the Arduino cost as much a cell phone. I want something cheap. Turns out, small, cheap WiFi routers like the Asus WL-520gu can run the DD-WRT Linux firmware and act as serial-to-network gateway for Arduinos (or most any other USB device). Here’s how to do it.

(Hey, is this a Wifi-controlled BlinkM? I think it is.) 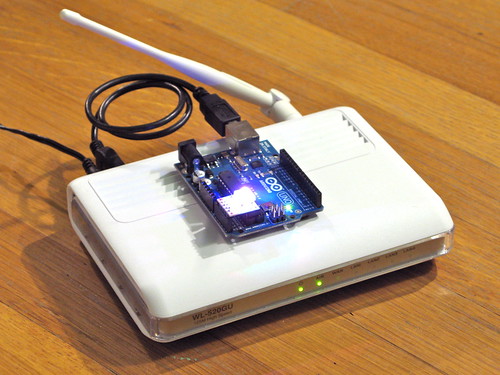 A quick video showing a router acting as a serial-to-network gateway:

This is not that new of a concept, hacking Linux onto a router for some neat DIY purpose. One of my favorite past hacks is MightyOhm’s WiFi Radio project. And of course, see my own book Hacking Roomba for an example of how to put a Roomba on the Net.

This post is specifically about trying to make a DD-WRT router a transparent gateway for an Arduino.

END_OF_DOCUMENT_TOKEN_TO_BE_REPLACED

Ever wanted to use any pair of pins for I2C on Arduino, not just the dedicated pins on Analog 4 & 5? Me too, so I made a quick little Arduino library called “SoftI2CMaster”, available in the “blinkm-projects” Googlecode repository.

Get it here: SoftI2CMaster on github

It’s still a work in progress, but it can write data pretty successfully and do it over longer cables than normal.

For the VIMBY/Scion Hackerspace Challenge, I created an array of BlinkM MaxM-powered accent lights for the device we made. Because the I2C cable was longer than a few feet, the normal Wire library that BlinkM_funcs.h uses to communicate with BlinkMs couldn’t be used. This is because the Wire library assumes a perfect bus. If there is any noise or other bus problems, the Wire library will currently lock up. For the SoftI2CMaster library, I wanted it to be very tolerant, even lazy, about bus problems and also have more tunable timing to let you slow the bus down. Of course, you still need pull-up resistors on the two lines. I’ve found using 2.2k resistors to be good.